Hinata, Dawn-Crowned, The Commander That Makes Your Second-Rated Cards Shine

A commander that allows your second-rate cards to shine. This deck can be built based on either a spell-casting focus or a token creation focus. Spell-casting focuses more on controlling and emptying the board of the opponent's threats while creating tokens that constantly are attacking the opponent and twiddling down the life total to zero. With the release of a new set, one of my favorite things to do is to find the commanders that allow second-rate cards to shine. In this article, I am going to share with you the brewing potential of Hinata, Dawn-Crowned from the Kamigawa neon dynasty set. 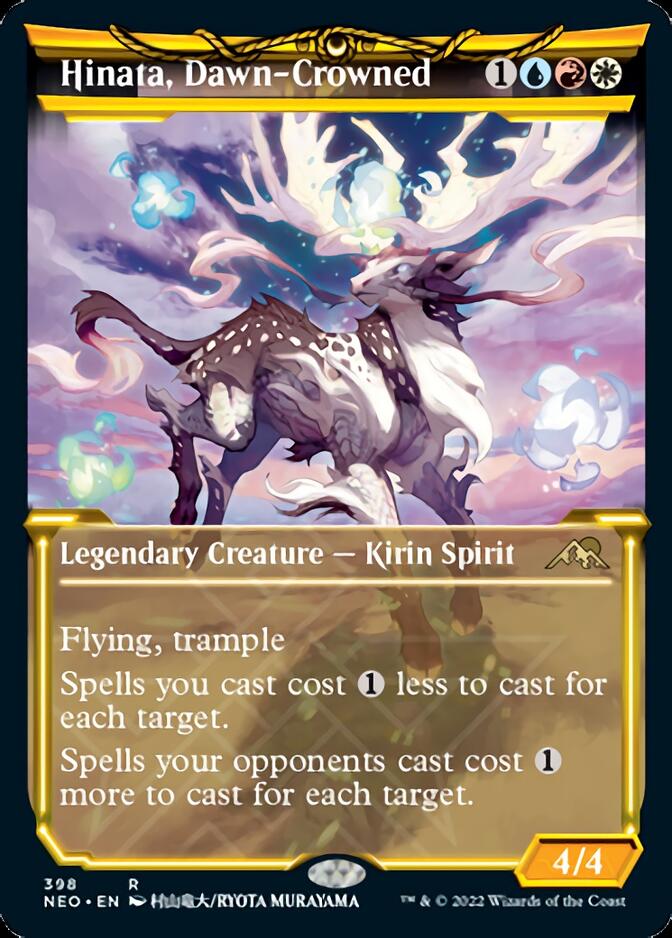 This deck can be built based on either a spell-casting focus or a token creation focus. Spell-casting focuses more on controlling and emptying the board of the opponent’s threats while creating tokens that constantly are attacking the opponent and twiddling down the life total to zero.

Thankfully, there is a lot of control-focused spells that became more powerful with the release of Hinata. One of the more well-known spells is Comet Storm . With the multi-kicker free, Comet Storm becomes an X spell that deals X damage to any number of creatures that you want to target. Anyone who has been on the receiving end of a cyclonic rift would know that there is nothing more backbreaking than a one-sided board wipe. With that being Hinata’s biggest strength as a commander, it makes dozens of spells a one-sided board wipe. Spells like Heliod’s Intervention could wipe away all artifacts and enchantments; Distorting Wake functions as a three mana Cyclonic Rift ; Curse Of The Swines is a quick way to exile opponents’ creatures while upgrading the tokens that are on your side of the battlefield.

There are other non-conventional control spells that Hinata makes great. For example, Mass Manipulation becomes a 4 mana X spell that steals X target creatures. The other card that is also important to mention is Winter Chill , which is a rather confusing card that can function either as a removal spell or a fog. The spell has two main drawbacks with the first being that you can only cast it during combat before blockers are chosen and, the X cannot be greater than the number of snow lands in play. However, the effect that is strangely unique with the opponent being able to pay 0,1 or 2 mana for each creature that is targeted, (i) if the opponent pays 0 mana then the creature is destroyed at the end of combat, (ii) if the opponent pays 1 mana then all damage is prevented to and by that creature, and finally (iii) if the opponent pays 2 mana then things function as normal. While this card is confusing, the fact that it is not all that well known makes it even more powerful as the opponents after all cannot plan around what they do not know.

Now moving on from more mass removal to the more surgical targeted removal. Such as Baral’s Expertise , which would normally be a 5 mana spell with Hinata, this spell becomes a 2 mana powerhouse that bounces three creatures or artifacts plus a free spell with the converted mana cost (CMC) of 4 or less. Overall this category of spells will ensure you break even or gain net positive card advantage. Dismantling Wave is another great spell that can destroy one artifact or enchantment that each opponent owns, resulting in a one-sided negative loss of permanent thus giving you a greater card advantage.

Another important factor to consider is how Hinata works with counterspells to create an upside of having more expensive counterspells. With their cost reduced to about the same as a normal counterspell (2-3 CMC) plus the versatility and flexibility that more expensive counterspells provide, this can be very advantageous. Sublime Epiphany can (i) counter a spell, (ii) counter an ability, (iii) return a nonland permanent to its owner’s hand, (iv) create a token copy of a creature, and, (v) draw a card for only 2 mana.

Several token creators work excellently with Hinata. One of the more powerful choices is Release the Gremlins which becomes a spell that would cost X and a Red with Hinata that destroys X artifacts and creates X 2/2s. Lowering your opponent’s board state while increasing another’s. Similarly, Launch the Fleet becomes a spell that doubles the number of creatures that are attacking for the cost of only 1 mana with Hinata.

While these spells have become insanely good with Hinata, the best token creators in this deck are permanents that reward you with tokens for casting spells. Some examples are, Zaffai, Thunder Conductor which works well with the “X spells” (given the CMC of “X spells” increases the more permanents it targets), easily fulfills Zaffai’s ability to generate a 4/4 token whenever a spell with CMC of 5 or greater is cast. Monastery Mentor is another great token generator that creates a 1/1 white monk token with prowess that can easily help you to win games quickly.  Metallurgic Summonings is also a great choice as it creates an X/X artifact creature whenever you cast an instant or sorcery spell where X is the spell’s CMC. In addition, Metallurgic Summonings can help to return all instant and sorcery cards from your graveyard to your hand if you control six or more artifacts.

Now let us discuss some of the spells that do not quite fit into any of the above categories which also become highly affordable and that will swing the game in your favor with Hinata as your commander. Magma Opus is one of the best spells you can consider. At instant speed, Magma Opus can (i) deal 1 damage to 4 separate creatures, (ii) tap down two other creatures, (iii) create a 4/4 token elemental, and (iv) draw 2 cards all for the low cost of 2 mana with Hinata on your board. This not only provides card-advantage but if timed correctly you may be able to kill 4 creatures while tapping down the remaining blockers to swing for lethal. Another great spell is Karn’s Temporal Sundering , which with Hinata, becomes a 4 mana extra turn spell that gives you an extra turn on top of bouncing a nonland permanent back to its owner’s hand. Finally, Reality Spasm is another spell that will only cost you 2 mana with Hinata. It can either tap down every permanent of the opponents or untap any number of permanents. Similarly, if this spell is timed correctly it can easily be a game-winning spell that can function both offensively and defensively. The tap down ability can be used to get an attack through to an opponent or to prevent an impending lethal attack by tapping down your opponent’s permanent before he or she gets an opportunity to do anything.

However, it does not matter how cheap Hinata can make spells if Hinata cannot ever stay on the battlefield. So it is important to build the deck with a few ways to protect Hinata from leaving the battlefield and that can be done in two separate ways (i) by only countering spells that either cause an opponent to win the game or threaten Hinata’s safety on the battlefield, (ii) by running spells that protect the commander from removal. A perfect example of the latter is Apostle’s Blessing , which grants a creature (in this case Hinata) protection from the color that is currently threatening said creature. On top of everything, with Hinata, Apostle’s Blessing becomes a free spell as long as you are willing to pay two life for the Phyrexian mana. For a more permanent solution, both Timely Ward and Shielded by Faith are auras that give the enchanted creature Indestructible. As an additional benefit, because auras target when cast Hinata’s cost reduction still applies.

Overall the best way to keep the deck running at full power is by not overextending. I do this by always assuming that one of my opponents has a spell that will stop me therefore, it is a good idea to keep a spell that will stop your opponent from stopping you. After all, without Hinata, the deck becomes just a traditional control deck filled with X spells that will not have as much of an impact on the board as the amount of mana that is being pumped into would suggest. However, with Hinata, I would not expect my opponents to keep their creatures on the field for long.

Here is the decklist. PrevPreviousVolo, Guide To Monsters, The Perfect Commander for the Casual and the Competitive

Jacethedeckbuilder is an out-of-the-box EDH brewer focusing on unique and sometimes janky decks. If you like decks that are interesting and a lot of fun to play. Follow him here!
learn more